On this Halloween, I have a guest writer, who has written a new fantasy novel.


Mike Phillips grew up on a small farm in West Michigan, living much the way people did at the turn of the century. Whether it was growing fruits and vegetables or raising livestock, Mike learned the value of hard work and responsibility at a young age. With all that hard work at home, Mike was always eager to go to school. He excelled as a student and went on to pursue a career in the sciences. Working as a Safety Engineer in the Insurance Industry, Mike soon became bored with the corporate grind. Writing engaged him like nothing else. After a few novels and numerous short stories, he thought getting published would be a pretty neat idea. And so, here it goes...


Author Mike Phillips joins us today and talks about goblins.

***
Hello everyone, and thank you for reading my guest post. My name is Mike Phillips and my new book is The World Below. I have been asked to talk about some of the more interesting characters in the book.
Writing about goblins was a riot! Goblins live on the fringes of human society. They make their homes in junk yards, abandoned buildings, sewer systems, and anywhere else people try to avoid. Once they find a likely spot, the get to work. Goblins are clever with tools and machinery. They will use and repurpose anything they can get their hands on, so many of their dwellings look like they were designed by frat-boys. Not always the best of neighbors, goblins have to take security seriously. They construct elaborate pitfalls to keep themselves safe from enemies like collapsing tunnels, pongee pits, and mechanical traps.
Goblins, like their human counterparts, each have a unique personality. They live in what they call crews, a sort of family, a lot like college dorm-mates. Each goblin has a special skill. One might be a bully (a most desirable skill in the goblin world). Another might be crafty at making traps. Some use sorcery or poison. Others are good at machinery. Some just eat a lot (another desirable skill). Goblins, in general, have a loose sense of morality. If it doesn’t hurt another member of the crew, with the obvious exception of fighting, then it’s usually okay. Fighting is always acceptable behavior, though if an enemy is around, a goblin is expected to stop fighting the other crew member and start fighting the enemy. Common sense rules like that are the cornerstone of goblin society.
That brings us to the topic of goblin social structure. Goblin society is feudal. They organize in crews, bound by familial ties or friendship. These associations are loosely formed, and if a goblin wants to go it alone, no one holds a grudge. A crew may have two or three leaders at a time. It is not unusual for goblins to disagree, so sometimes they have no real leader at all. Though they fight with each other like crazy, but they are deeply loyal in times of trouble and would do anything for the other members of their crew. No female goblins appear in The World Below, but this mystery will be investigated in the Chronicles of the Goblin King: Book Three.
Thank you so much for joining me. I hope you enjoy The World Below. Please visit me at mikephillipsfantasy.com.
About the Book: Chronicles of the Goblin King Book One.

In ancient times, magical creatures inhabited the Earth. They lived on mountaintops, in the branches of trees, at the bottom of lakes and rivers.

That was long ago, before the human race declared war on the creatures they feared and hated. Now, the enchanted peoples are all but gone. Those few who remain fear being stretched out on an examination table in some secret, governmental facility. The only place they can hide from the ever increasing number of satellites and smart phones is in the World Below. 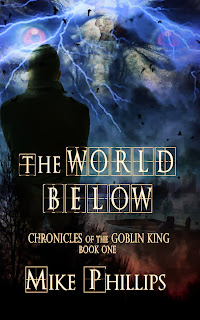 For a moment, Hume stood still. Violence loomed as he looked upon the crystal ball. He was fuming but able to keep his emotions under control. Giving Finkbeiner a final, appraising look, he came to a decision and relaxed.

The choice did not go unnoticed. The Baron met his gaze and returned an appreciative nod. His hand was once again in human form. There was no transformation, no morphing of one shape to the next. It just happened.
Returning the crystal ball to the safety of his robe, the Baron put a hand on Hume’s shoulder. The gesture was accepted and they began walking. They didn’t speak as they made their way from the throne room but the tension between them had eased.
The corridors were as broad as they were tall, making gentle curves rather than straight lines. Even the intersection of hallways weren’t square. It was like the entire place was carved from stone by some great serpent, rather than nailed together from scrap wood by the Baron’s slaves.

A short walk brought them to the Laboratory. The room bustled with activity. Live specimens were everywhere. Some of the creatures were bizarre beyond imaging, sprouting thick fur or feathers in spectacular shapes and colors. Others were the product of unlikely coupling. There was a cat with a snake’s head and tail. A small dog had the claws of a lobster.

In most cases, their cages were barely large enough to hold them, let alone allow movement. More of the pig-men tended the various animals, but they cowered in fear upon the Baron’s arrival.

"Please excuse the hubbub," said the Baron, tittering like a schoolgirl. "It’s the lesser harvest today."

Disgusted by the odor, Hume said, "It stinks."

"That’s fear." The Baron’s eyes were alight, like he was strung out on some powerful narcotic. "They know what’s coming. The poor brutes aren’t as dumb as they look. Fear and blood, there’s nothing like it."

A cauldron sat in the center of the room. It was as large as a dumpster, made of hammered copper turned green with corrosion. The lip was covered with the blood and gore of untold heinous rituals. Fire burned underneath, flaming high as they approached. The copper glowed with the heat, shining with a reddish orange light like the sun.

Unaffected by the heat, the Baron walked toward the cauldron. Hume followed a few steps behind. Even though the slaves backed away, neither the Baron nor Hume broke a sweat. This was the Baron’s work. He kept Hume safe until the deal was finished.
Inside the cauldron, a rancid mixture resembling feces was bubbling. The smell was terrible. Hume tried to hold his breath but soon gave it up and covered his mouth with his sleeve.
Withdrawing a knife from his robe, Finkbeiner offered it to Hume. It was a kitchen knife with a wood handle. The blade was serrated, bent with use, and pitted with rust.

Cutting their hands, they let their blood run into the boiling contents of the cauldron. Smoke fumed and billowed in clouds. The smell was rancid as Lucifer’s breath. It stung the eyes and burned the lungs. Hume could hardly breathe but would not allow himself to cough. They spoke their oaths to each other, the magic binding their minds and bodies to their words.

"Done!" Finkbeiner announced. "Good luck to you. I’ll provide aid however I may. Just ask and it will be done."

"Thanks," said Hume, narrowing his eyes. "No need to show me out."

went After Hume left, the Baron returned to the throne room, finding his guards still nursing their wounds. Taking a broken pair of pliers from a pocket, he pulled the worst of the splinters from their bodies. That done, he grumbled an incantation, healing them.

"Mutt, Tigg, I want you to keep an eye on our new friend. Make sure he keeps his part of the bargain."

"Yes, Master," grunted Mutt, the bigger of the two, in a rough voice. "You want we should stick a knife in him if he looks to be playin’ round?"

"No, not right away." He took a small bottle from the shelf, amongst other potions of dubious efficacy. "One drop of this into a pool of water and we can talk. We’ll give our wizard friend enough rope to hang himself, but who knows? He might just do the job I require of him."

"Now, to make you both a little more presentable. Clothes make the man and so does the skin."

Returning to the shelf, the Baron sorted through a number of bottles and flasks until he found what he looked for. It was a small, earthenware jug, stopped with cork and dusty with years of neglect.

"This will do the trick, but take care. The effects wear off quickly. I don’t have much, so use small sips whenever you go out in public and only when you absolutely have to. Otherwise stay to the shadows."

"Now go; follow him. Find out where he lives and what he does in the world above. You must not fail."