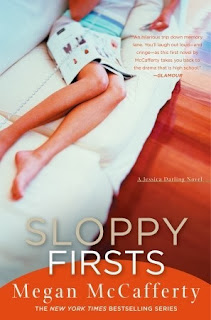 Summary: When her best friend, Hope Weaver, moves away from Pineville, New Jersey, hyper-observant sixteen-year-old Jessica Darling is devastated. A fish out of water at school and a stranger at home, Jessica feels more lost than ever now that the only person with whom she could really communicate has gone. How is she supposed to deal with the boy- and shopping-crazy girls at school, her dad’s obsession with her track meets, her mother salivating over big sister Bethany’s lavish wedding, and her nonexistent love life?

My thoughts: This book is a diary narrated by 16-year old Jessica Darling, the cynically witty and precocious teen. She often discusses trivial and shallow subjects pertaining to her school and family life. Like Seinfeld, it is the “book about nothing,” but it is still hilarious.


I must admit that I had a few eye rolls when she talked about the Clueless Crew. “These are suppose to be my friends. But more often than not, I can’t stand them.” (12) Then why hang out with them?


Jessica was definitely a character that I could relate to. She was so keenly observant that she was like the kid from The Wonder Years. “Am I the only creature with a vagina who thinks that weddings are ridiculous?” (32) She just tells it like it is. Love it!


“As soon as I got there, I remembered why I’d held off. I hate waiting rooms in doctors’ offices. First of all, they’re full of sick people, spreading their germs all over the place. I found this particularly annoying because I wasn’t sick. I was getting all the contamination without giving any. Secondly, the magazines suck. I guess they figure Highlights will appeal to both ends of the drooling spectrum: children and senile senior citizens. Everyone in between can just die of boredom, or of whatever disease you’re at the doctor’s office for, since they make you sit there so damn long.” (92) It’s like I could’ve almost written this.


One thing I didn’t like was her obsession over her best friend and the desire to get devirginized. Did she not have anything else going for her? Probably not, which was made her the self-deprecating and gloomy teen you just love.