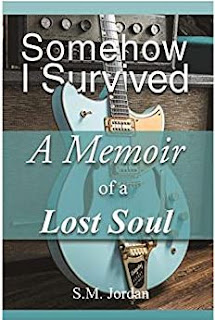 With this very raw and personal story of S.M. Jordan's life, filled with survival and hardships, you see how he has overcome every negative situation. From overcoming problems as a child, such as being shy around girls, to adult issues, like being homeless, Jordan's story proves that finding God, happiness, and love will overcome all your hardships.

TELL US ABOUT YOUR NEW BOOK.  My book is a memoir starting with some early memories of elementary school. Being shy around girls, then trying to overcome my shyness, meeting the wrong kind of girls. Finding myself to be an absolute misfit among the friends around me.

WHAT INSPIRED YOU TO WRITE THIS BOOK? I read the book “Benny by Harris Cooley” this book was based on the true life story of the Author. He seemed to be a very intelligent man who had a lot of bad breaks in life. He struggled for many years before finally finding happiness in his life.

WHAT DO YOU HOPE READERS WILL GAIN FROM YOUR BOOK?  I’m often miss represented so I want people to know the truth about me. I overcame many challenges and setbacks. I was never a quitter. I lived overcame many difficult situations on my own before finding love and happiness.

WHAT CRITERIA DID YOU USE WHEN SELECTING THE COVER FOR YOUR BOOK?  I often think of my life as a song. I relate my story to a lot of song lyrics. The many songs I would like to have written. My life was a sad song that has never been sung. That’s why I chose an electric guitar for the cover.

WHEN AND WHY DID YOU BEGIN WRITING?  I was invited to an open poetry reading in 2003 at age 38. At that time, I had never written a poem in my life, I stayed up late the night before writing many lousy poems. I selected five of the least awful poems and worked on them till they were good enough to read openly. Many of the great poets came to greet meet me after the reading to tell me they liked my stuff.

DESCRIBE YOUR WRITING STYLE.  I never thought of my writing as a style, I just try to tell my story as truthful as a can.

WHAT ARE SOME OF THE CHALLENGES YOU FACE AS A WRITER?  Spelling, not using the right words trying to describe what I’m trying to say. Emotional trauma I go through trying to write a traumatic story.

ARE YOU WORKING ON ANY NEW PROJECTS? Yes, I’m working on my second book. I hope to fill in what my first book left out.

DO YOU HAVE A BLOG OR WEBSITE READERS CAN VISIT FOR UPDATES, EVENTS AND SPECIAL OFFERS? 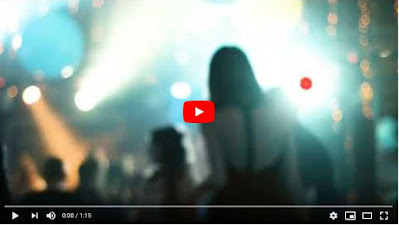 Posted by Sandra's Book Reviews at 11:35 AM No comments: 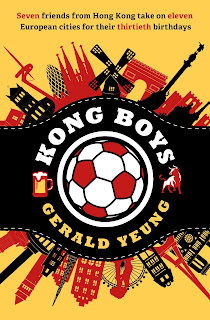 In summer 2006, twenty-year-old Gerald Yeung and his childhood friends from Hong Kong travel to South America and Africa on their parents' dime. Confronted by challenges foreign to their privileged upbringing, the "Wannabe Backpackers" persevere in their Christian Dior clothes. They make plans to do it again when they turn thirty.
The decade that follows doesn’t go exactly to plan. Gerald chases the American Dream in a town of twenty thousand and subzero winters. Others pursue a fast-and-furious life in Hong Kong. They all experience failed relationships, career setbacks, and a decreasing ability to impress girls at clubs.
The summer of their thirtieth birthdays, they hit the road again to fulfill a lifelong dream — the 2016 UEFA European Championship. Set during European soccer’s most anticipated event, Kong Boys traces a friendship that transcends distance, culture, and time, dovetailing the different trajectories of seven boys in a decade of changes in Hong Kong. Kong Boys is a celebration of youth, brotherhood, and a sport of incomparable beauty.

We return to our quaint country retreat after dinner. Though we have only rented the loft, Elisabeth gives us free rein to the whole house. She says she'll sleep in the smaller cabin because, again, her husband is out of town.

Her home has a Beauty-and-the-Beast quality to it. Sofas blanketed in white sheets, cracked photo frames, growth charts in the children's room, a wobbly foosball table, and an out-of-tune baby grand piano are all relics from happier days. DJ, a profile picture connoisseur, recognizes endless photo opportunities here. First, he poses at the piano doing his best Jay Chou impression. Next, he perches at the easel channeling his inner Picasso.

My own Facebook days are long gone; DJ is still at the peak of his game. His last profile picture update took social media by storm. Within hours of its release I was made aware of it by no fewer than four sources, one being Wendy, my cousin, and a hi-bye friend of DJ’s, at best.

“Your friend. LOL,” she captioned.

It was all she had to say.

When I first laid my eyes on the photo, I thought it was DJ's grandpa in his youth. It was shot in black and white with a graininess emblematic of photos from the sixties.

“We used a special filter at the studio,” DJ would later tell me. "Each shot took over an hour.”

Locking eyes with the subject in the picture for the first time, I came to understand the reason for all the social media commotion. Leaned slightly forward and with his face turned forty-five degrees, DJ's steadfast gaze breathed life into this candid shot. The implicit caption read, "Do you want to dance?" I didn't even notice that his blazer was open and he was bare chested.

For days we ridiculed him, both in his face and behind his back. We gave him a new nickname—Model.

And that wasn't the end of the story.

What he posted on social media was only a cropped version. On one of my later trips to Hong Kong, I stopped by DJ's place before dinner. When he was in the bathroom getting ready, I browsed on his computer to kill time. And there I saw the original. To my horror, it was a full body shot with no pants on.

All he was wearing was the blazer.

I closed the file quickly.

"Who took those studio pictures for you?" I asked later.

"My friend and his wife," he replied.

Some relationship he has with this couple.

My review: “Spoiled Hong Kong boys venturing outside [their] sheltered lives to see the world.”

A fabulous trip through Europe to watch soccer championship games. It starts off in Amsterdam with a visit to the sex museum and prostitution exhibit while smoking marijuana. They continue going from city to city, talking about their lives, drinking, and gambling on sports. The boys definitely have a love for soccer; it’s all they talk about. I liked the intrepid traveler aspect of the journey. Just the thought of stepping out of your world and into a new one was exciting to me. I honestly expected to hear a more reflective aspect from the boys during their travels like what they saw, what they learned, and how the trip correlated to their own lives. Did anything remind them of anything? Did they grow in any way spiritually or emotionally? And, most importantly, how did this trip change them, if any? I guess I expected a deeper, journalistic sense.

With its easy narrative on a fun and comforting level, the story exemplifies male bonding and brotherhood, and it inspires wanderlusters to take a bucket-list trip like this. It expressively summarizes the road blocks of travel on a budget and without a clue. These boys were basically flying by the seats of their pants.

Posted by Sandra's Book Reviews at 1:27 PM No comments:

Review: THE DUDE WHO WANTED OUT by Mike Reuther 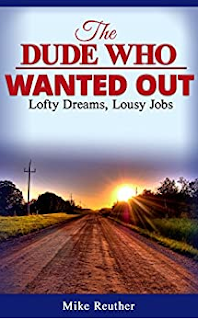 “There has to be more to life than going to work, making money, and being miserable.” – Bill

A man is sick of the whole “Be Happy, Be Successful” mantra. Can you blame him? Happy people are just sickening. And who’s really happy nowadays? You think there’s gotta be something more to life than the daily grind, but there never really is.

Then the man gets fired from the real estate gig and contemplates what his choices are. He talks about his dreams of being a pro baseball player and possibly joining in a business venture with a friend. Kind of goes on and on.  It’s just like the title says, the dude wanted out. It’s nothing but “lofty dreams” and “lousy jobs.” Not very interesting listening to a fantasy-wielding sourpuss.

Review: 3 MPH: THE ADVENTURES OF ONE WOMAN’S WALK AROUND THE WORLD by Polly Letofsky 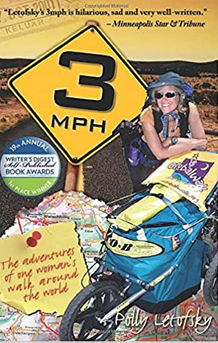 Although some of the quips were witty at times, for the most part, the narrative was very dawdling, constantly yammering about this and that. Polly certainly strikes me as a cool, brave chick by accomplishing this epic journey, and this could’ve been an okay travel memoir, but it wasn’t interesting to read.

My rating: 2 stars
Posted by Sandra's Book Reviews at 1:15 PM No comments: