Review: TAKE ME FOR GRANTED by K.A. Linde 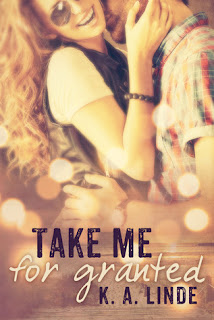 Aribel is a Princeton girl and dead-serious about her studies and goals. But her head-strong intellect may not be enough to resist the rock n’ roll singer, Grant.


Quite frankly, I thought Grant was cocky and disgusting. Kudos for her not falling for his so-called sexy charisma—at first. She eventually does fall for it.


The whole story is basically a sexy cat-and-mouse game from the start. He wants to get her into bed, and she does everything possible to fight him.


I didn’t like that Aribel went from bright, ambitious student to painted-up hussy in 60 seconds. And for what? Grant? The two were just obsessed with getting it on. Not that I have a problem with a few love scenes, but this was just too much, almost to the point that it became unbearable.