Review: COME AWAY WITH ME by Ruth Cardello 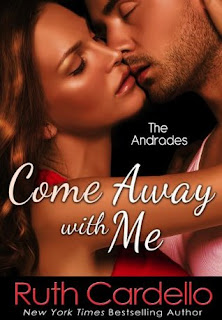 Gio Andrade is a rich investor. Julia is a struggling jewelry-maker working night-shift security. One night, she accidentally mistakes him—owner of the company—for a burglar and knocks him on the head. Obviously embarrassed for hitting her boss, Julia hopes that he’ll be able to forget, even though she can’t seem to forget about him.


All Julia wanted to do was sell her jewelry, but she soon realizes that she’s not a savvy business woman.


“Groped by a teenager. Propositioned by a married man. And don’t forget probably fired.” (LOC 301)


Gio was one of society’s eligible bachelors, one who rocked the love-em-and-leave-em credo. “Emotions were a distraction. They led to chaos and poor decisions.” (LOC 604) Still, he couldn’t help but be captivated by the alluring night security guard.


In the beginning, the two are constantly pining for each other, going mad with whimsical fantasies and worrying over the ramifications of this affair. It moved pretty slow. The innocent foreplay mainly consisted of him romancing her, which was sweet but bland. It’s an okay love story.