Review: A PRESCRIPTION TO DIE FOR by Bridget Bowman 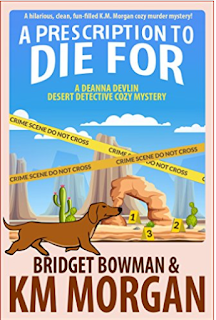 Deanna was a reporter that was in hardcore for a good story. No more doggie pedicures and neighborhood bake sales.  Who would’ve thought the story would land right into her lap.


At her friend’s engagement party, the soon-to-be in-laws all get into a heated argument, especially the two rival pharmacists with one trying to put the other out of business.


Deanna loved detective shows and always had a knack for figuring out the killer. Well, those skills would come in handy when, the next morning, two police officers wanted to talk to her about a murder—the murder of the pharmacist. Yeah, I could imagine who wanted that mean, bitter, old geezer dead. On the one hand, she felt bad for her friend, whose engagement party was ruined by this old man. On the other hand, her reporter side was buzzing with the story of a lifetime.


Was it the trophy wife, the ex-wife, or the rival pharmacist? Maybe it could’ve been the son. Or could it have been Deanna’s friend? The only way to prove everyone’s innocence was to find the killer.