Review: THE NIGHT MADE THE DECISION by Alexis Sundquist 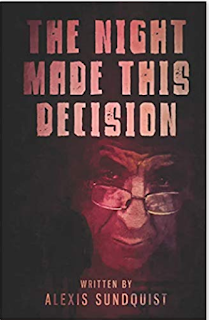 A man spends his days in prison. Each day, Rick whittles his time observing and listening while his execution date lurks ahead.  A good deal of time is spent imagining his death. Injection? Electric chair? Will he go quickly? Will he go quietly?

“Forty-four years they have kept me in this cage, and now they will have my death on their conscience.” (19)

Suddenly, Rick’s case is re-opened with new evidence proclaiming his innocence. He was free. But even as he walks the open streets, he carries with him the mark of the prisoner and still dreams about death.

“Then she informed me the man who wore my crimes but not my imprisonment was dead. Dead, for several years now, flaunting the freedom I had not been so gracefully granted.” (35)

Story reads like an autobiography with the man relaying his morose thoughts and hopeless antics. His prose is dark and pensive, rendered with a lovely cadence. The writing was good. The reader basically follows along a former inmate’s adjustment to life beyond the prison walls—a new world.  You can tell that he finds comfort in the dark, and his obsession with death was overwhelming.  At times, the narrative lagged and staled a bit, making the reader go weary. It just seemed like he would go over the same things over and over again. But I liked the writing style and the concept was pretty good.

My rating: 3 stars
Posted by Sandra's Book Reviews at 9:42 AM