Review: BELIEVE ME by Kay Harris 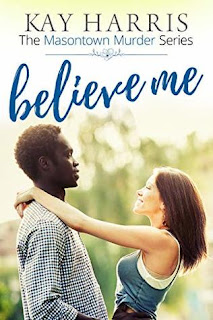 Sophia is a college student several miles from Masontown with a new hair color and a new name. Nobody knew what she was running from, but they eventually found out. Yet, surprisingly, she gets the attention of Taye, a star hockey player and bisexual.


The whole campus knows about Sophia, treating her like the plague, but Taye doesn’t care and seems genuinely interested in her. Eventually she comes clean with him. She was accused of murder but was never convicted. Still, everyone sees her as a killer…except Taye.


Easy read. Story is a lesson to look twice before judging and to give people a chance. Sophia often closed off, pushing people away and never giving them a chance. Well, Taye’s love changed that.


A good read! It mostly concentrated more on Sophia and Taye’s love, but the killer is still out there. Will he reveal himself in the series? One way to find out…