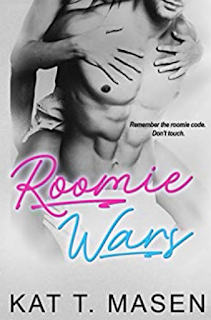 Zoey is roommates with Drew, who went from geek to chic and looked so GOOODDD.


While Drew is healthy-eating, gym obsessed nut cake, Zoey drowns herself in junk food, sweatpants, and dateless nights in front of the TV. The two were like fire and ice—different personality types that managed to get along. They can’t stand each other (quirks and idiosyncrasies) but yet they can’t live without each other.


Dialogue was snappy and witty. Characters were relatable, especially Zoe, who often escapes into the world of fiction, not limiting herself to just one genre. If only Zoe could learn to trust men again, since the betrayal with her ex was such a devastating blow to her self-esteem.


As a joke, Drew ends up kissing her, which spirals them both into awkward confusion. After all, roomies don’t kiss. It’s a code you live by.


Story basically consisted of roomies forever at war with their confusing feelings and sudden urges. Suddenly they don’t know how to act around each other. Characters go on and on, obsessing and complaining about each other. Each can’t stand the Code Red, the code indicating when one is getting lucky. It drives them mad with jealousy.

My rating: 3 stars
Posted by Sandra's Book Reviews at 9:40 AM