Review: GHOSTERS 3: SECRETS OF THE BLOODY TOWER by Diana Corbitt 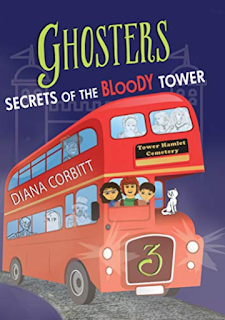 Theresa  looks back at her new ghost friend. “I’m sorry, could you repeat that, Stanley?” She listens, and a slow smile begins to grow. “Really? No, we weren’t planning on it.”
“What?” I pull some more tissue from the box. “What weren’t we planning?”
“A trip to England. He says we’ll be going soon.”
“We are?” Doubtful, but not one to argue with ghosts, I blow my nose and say, “That’s nice. I haven’t seen my gran for over a year.”

A few weeks later, Stanley’s words come true, and Theresa, her brother Joey, and her friend Kerry find themselves in London, England. Of course, they expect to spot one or two ghosts as they tour the Tower of London, but they don't expect to meet the ghosts of two young murdered princes with an urgent request: find their hidden five-hundred-year-old remains.

The princes want their bones to be buried at Westminster Abbey, where they belong, but something doesn’t want that to happen. The kids find a lot of spirit helpers along the way. Who knew England had so many ghosts? Can three kids and their ghostly friends solve a centuries-old unsolved crime that rocked England?


My review: Welcome to London!

Kerry and Theresa along with Theresa’s little brother are on a fun trip in the UK. Why would you stay in a hotel made of clowns? Those are scarier than the ghosts.

Kerry and Theresa are ghost hunters (Theresa can actually see and talk to ghosts.) One of their visits is to the Tower of London, where the Bloody Tower sits. Could the boy they saw be the ghost of Prince Richard, who was last seen the Bloody Tower? FIND OUR BONES.

Communicating with a ghost that has been dead for over 100 years wasn’t easy, but the kids handled it calmly and courteously. Throughout the story, the kids commune with several more ghosts that it almost deviates from the main mystery. I mean, trying to bring up a dead cat?

Can they put the old spirits to rest?

It’s a wild, ghostly adventure through London. Reading this reminding me of what I saw—Tower of London, Downtown Abbey, National Portrait Gallery, Buckingham Palace, and the London Eye. And what a fun cover! It’s graphically simple with eye-catching colors. There were some lagging areas, but it was overall enjoyable. At times, the kids go off-kilter.

A fascinating and informative little mystery!

Posted by Sandra's Book Reviews at 9:29 AM