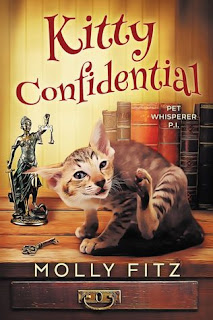 When acting didn’t pan out, she opted for the next best thing: paralegal assistant. It wasn’t her dream job, but, hey, she had bills to pay.


She didn’t know it then, but Angie Russo’s life was about to change.


One day at work, Angie was trying to make coffee for her egotistical and arrogant lawyer bosses. When she plugged in the coffee maker, she got the shock of her life (literally) and lost consciousness. After a while, she woke up the insulting comments of an annoying cat. But wait…cats don’t make comments. In fact, they don’t say anything!


From that moment on, Angie realized that she could communicate with pets, thus, transforming her into a pet whisperer.


The story goes that the cat, Octavius whatever, wanted Angie’s help to solve his owner’s murder. But, first, she needed to wrap her head around the fact that she was now talking to a cat. Personally, I would’ve stuck with Octo-Puss rather than Octo-Cat.


Funny and witty! How Angie argues with that bratty cat was enjoyable. Like two cats in a knap sack, they quibble and quarrel over every little thing as they try to solve this nutty case. Leaving all the money to a cat certainly could be a motive. Could her boss actually be a killer though?