Review: STORM IN A CUP OF COFFEE by Keren Or 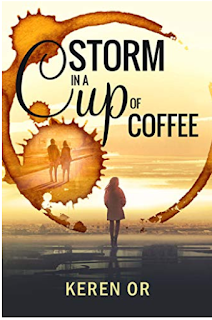 Eli was at a low point in her life, which is why she visited the “coffee witch,” a foreteller that could see things with just a coffee stain. At first, Eli didn’t believe in such nonsense, but then Lena ended up knowing things about Eli that she never really told anyone. One visit, Lena told Eli that in a few months, she would get a new job, where she would meet her future husband. And that’s why Eli decided to uproot her whole life. All Eli was looking for was a quiet, uncomplicated relationship, and that was NOT Lucas. Lucas was a divorced father of a 6-year old son.


Suddenly, Eli gets it in her head that Lucas was The Chosen One, which turned Eli into a nuisance. All of a sudden, she becomes desperate for his attention and would try anything to cross paths with him at work. And why were we reliving her teen years?


Overall, this story was thought-provoking and well-written. I thought it had a good start with the mystique of the “coffee witch,” but then I was getting a little annoyed with Eli, who professed to be independent and self-sufficient.


I thought this had a nice cover. It was a true embodiment of the story. I liked how the coffee stain encircles a lonely woman and a splotch stamps a loving couple in the corner. But the cover didn’t compensate for the story droning on and on in a flowery prose without really going anywhere.