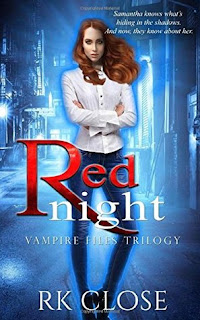 
After witnessing what looked like a “death by hickey” moment on a routine surveillance job, Sam could not stop thinking how elusive, dangerous, and exotic the Mystery Man was. Did she dream about him that night? Or did he follow her home?


Then she learns his name: Adam. Adam continues to watch her, which is kinda creepy.


I thought Sam was quippy and sassy with a cool job of following cheaters and stealers; however, her story keeps a steady pace throughout, almost repeating the same scene over and over again. At times, I felt like there wasn’t much happening. Sam just seems to ruminate a lot, mostly about Mystery Man. It is perceived that Adam was a vampire, but it was never confirmed. Using her reporter’s instincts, Sam chases the trail—a very long and slow trail.


I thought this would be better. There were some things I liked, but, mostly, I didn’t like it.