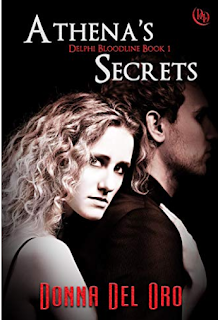 Nine-year old Athena didn't know what was happening to her when the sounds and images sent her brain in a whirlpool. Her mother told her that this would happen, but a little girl could not prepare for such a feat.

Ten years later, Athena is trying to live her life at an art school. She still received images and thoughts that were difficult or even impossible to interpret. When a girl is found murdered, Athena is recruited by police force to help track the killer.

I love stories about psychics, but this story deals more with the science of clairvoyance. It becomes very technical and there's a long, enriching history of the Delphi line. Although the plot was a little more convoluted than previous works, the author is masterful at the craft, creating stories that are well-written and thoroughly researched. It's got international mystery and intrigue.

My rating: 3 stars
Posted by Sandra's Book Reviews at 8:22 AM