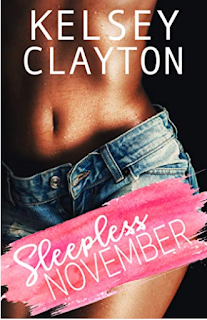 College student Kayleigh could never quite compare to the other girls, which is why a stud like Caleb wouldn’t think to look twice at her. One of the things constantly on her mind is her weight, which is why she tracks the calories she consumes on a daily basis. “Skip dinner, wake up thinner” are words she’s had to live by.

One day, she’s forced to team with an arrogant, egotistical jackass for a class project. As the two reluctantly work together, she begins to see that he may not be so bad after all. Then he stumbles upon her food journal. To her surprise, Holden actually wants to help her.

“Perhaps the boy I couldn’t stand will end up being the one who saves me.” (49) Perhaps he would end up being more. How could it when he was dating her roommate?

A simple story of an unlikely bond amidst social angst, peer pressure, and eating disorders.  You can’t help but feel bad for Kayleigh as she struggles with her weight and anxiety. She constantly beats herself up for having the tiniest bite of food. It was frustrating to see Holden caring so much about her when she refused to do anything to help herself.

Things get even more complicated when the two sleep together. As if Kayleigh wasn’t feeling guilty enough. But no matter how much she tries to push him away and forget about him, Holden is still there. Tensions run high, and the emotions displayed by such earnest characters are raw and endearing.

Was this just a harmless fling…or could she really have something with the university player? It’s certainly NOT easy. It’s not a wonder why Kayleigh feels the need to run.

“It’s an escape—from all the negative thoughts, the calories I’ve consumed, the girls Holden has slept with, the broken promises in my life.” (181)

The couple’s addictions may be more than what either of them can handle.

A sweetly complicated and chaotic romance that readers will fall into.

My rating: 4 stars
Posted by Sandra's Book Reviews at 9:19 AM