Review: SISTERS, STRANGERS, AND STARTING OVER by Belinda Acosta 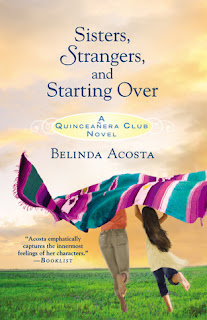 Once again, Belinda Acosta dazzles us with her unique writing style, which exudes a raw eloquence dripping with vibrant resonance.


Although complete opposites, Larry and Beatriz have an undivided love between them. Larry is the type of guy who would be there for Beatriz and would do anything for her—very rare in a man. When this strange, little girl shows up, he steps up, assuming the role of “the man.”


My heart goes out to all the characters, especially Celeste, whose world was turned upside down with being tossed into the street like garbage after the sudden death of her mom and then having to live with a horde of strangers—most of them boys.


The families were a constant reminder of my own, particularly the part where all the women were gossiping about the newcomer while the men were standing outside in silence, eating and drinking. I’d so much rather be outside.


Full of mysterious secrets you can’t wait to unravel, and everyone had secrets that tore at them like razor claws. The characters were well-drawn as they lure you into an emotional whirl of drama and sinking turmoil. What I found most interesting was that nearly everyone faced the decision of choosing sides—between the one they love and the familia (their blood.)


I did find it a bit cliché that there had to be a quinceañera, but, then again, this was a quinceañera novel. I would’ve liked it better if Beatriz or the reporter had tried to probe the mysterious death of her sister, Perla. She didn’t even try to find out who killed her (I would’ve liked to have known.) But I guess this novel was more concentrated on the drama rather than the suspense, otherwise it would be a thriller, right?


Nonetheless, this was a Mexican fiesta of words. Acosta mixes the traditional and the non-traditional in a powerful, insightful story.

My rating: 4 stars
Posted by Sandra's Book Reviews at 7:59 AM