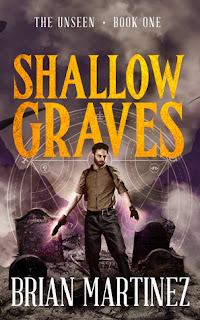 A phone call leads Officer Franklin Butcher to the small-town church, where an old priest had some dreadful concerns. What they were, we don't know.

At first, you're not really too clear on the mystery. There's various characters that enter the scene, but not much is happening. Something was off about a couple's new house, especially with the plumber just disappearing. On top of that, there are phantom images, a demon dog, and eyes in the sink? Something was going on...but what?

The writing was pretty good and I have to say that there were some interesting descriptions. For example: "Its ever-changing skin was textured in bees wings and bird legs. Dead feathers and rotten scales. Black eyes that moved or didn't. Mouse bones wrapped in squirrel’s tail." (58) Talk about a creep factor. Ewe! What the heck is that? It was like Night of the Living Dead or something.

It turns out that the plumber manifested into this thing, "not a functioning man gone wrong," but a thing of pure evil. The house was obviously possessed.

This book has "creepy" written all over it, which is great for horror fans; but the thing was that with all the calamity, strangeness, and "ick" factor, it was kinda hard to get anything straight. What was this thing with The Self? I didn't quite get that. But, evidently, bodies were dying and being reincarnated into...things. This was just plain bloody horror.

My rating: 3 stars
Posted by Sandra's Book Reviews at 7:34 AM