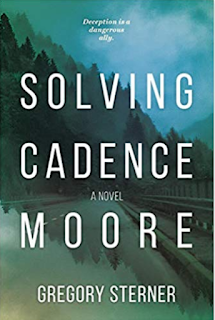 Radio host Charlie Marx had an idea and a pitch: to find out what happened to Cadence Moore. The Cadence was case was truly one of the classics...and the most unsolved.

"Even if this thing is the ultimate cold case… even if we’re barking up a dying tree, if we carve out the right story we will succeed. We will accomplish what I’ve promised my bosses we can accomplish." (9)

But, for Charlie, this was more than a chance for good ratings, since he's been obsessed with the Cadence case. Cadence Moore was a singing sensation, on the brink of stardom, and, on one tragic night, she just disappeared without a trace.

This was an interesting spin to the traditional murder mystery mainly because this whole thing was being aired as a miniseries for a radio show. The whole scheme behind it was to boost ratings, make careers, and ultimately cash in. Part of the narrative is written as radio podcasts with Charlie reciting the myths, mystery, and the climactic conclusion to the disappearance. The podcasts were written in a way to obviously drum up anticipation for the audience. To me, it sounded more like a lot of reporting, which didn't make for very compelling reading. The writing was pretty good, but I just didn't connect to the story very much.