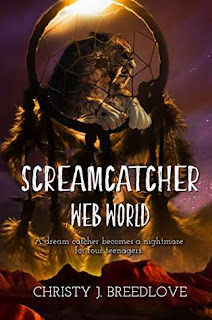 A dream catcher: a woven item designed to trap the bad dreams.

All 17-year old Jorlene has had were bad dreams, ever since the tragic death of her parents. But what happens when she stops having the bad dreams and starts living in them?

Story was well-written for the most part, but it was somewhat confusing. At times, it was hard to tell what was going on. I had a hard time picturing where the characters were. I understand they were trapped in this dream world (the dream catcher,) but I just couldn’t quite grasp the setting. The whole thing is an intricate web of mystery, which some readers may get a kick out of. But I just couldn’t get into this world. The concept sounded interesting, but I felt lost and that, in itself, lost my interest.

My rating: 2 stars
Posted by Sandra's Book Reviews at 7:47 AM