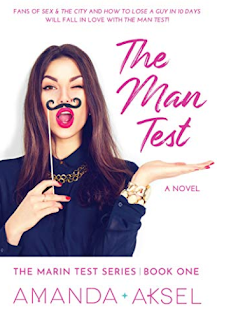 
But Marin soon becomes one of those problematic couples when she catches her fiancé cheating on her. Her dream world is shattered in a matter of milliseconds. Would she ever love and trust again?


Then she reads a book that reveals the truth about men: All men cheat and all men lie. She soon learns that the male species carries a “man disease of deceit.” So then she spends her time researching and learning more about “the truth.” And to prove the truth to her friends, she comes up with The Man Test—she will date a man and show that he will lie and cheat.


If you go looking for trouble, you will find it. Was Marin going to find trouble on this Man Test? Of course, especially when she meets James, the perfect specimen, who actually seems to be a really nice guy. We’ll see.


Can she pretend to like someone while having an ulterior motive? Or will she fail the test?


I thought this was lovely, candid, and well-written. I liked the concept of the Man Test and how it all came to be. Of course, you undoubtedly knew that there would be some blunders and misunderstandings, but they were not as harebrained as I would’ve liked. What I didn’t like the most was that it gets too scientific on the statistics of cheating men. This goes to show that even a therapist can be crazy, especially when it comes to love. And I kind of figured that guilt was eventually going to set in and Marin would realize that she may not have all the answers. Story was interesting up until half-way through, then it sort of tapered off from there. Overall enjoyable though.