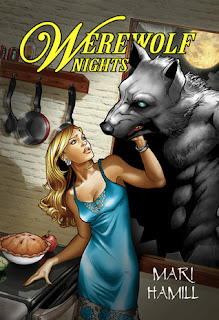 Threatened by financial ruin, widowed bakery owner Catherine Mercy leads a solitary life with more interest in reading about werewolf lore than in finding a man. Her one true love disappeared after high school and her now deceased husband kept her trapped in the house claiming that a werewolf might hunt her down one day, just as her grandmother repeatedly warned her. When Hollywood interrupts the town's monotony by shooting a werewolf movie on location, Catherine's best friend Anne pushes her to audition. Already in her thirties, Catherine feels ridiculous trying to become an actress, but lands the leading role.
Catherine's daily routine turns into a hair-raising adventure as fame begins to surveil her wanderings and she falls for her sexy costar Greg Byron despite this actor's neon warning sign that flashes conceited womanizer. He's also smitten by her, but just when they are about to find happiness, a wolf bites him.
While Greg's features turn lupine, Catherine discovers a resemblance between the movie script and her family's history. Frightened, Catherine recruits werewolf expert Steve to figure out if the movie's werewolf legend is real and if Wolfern, the werewolf her grandmother dreaded, has finally come for her. If so, Greg will turn into a werewolf. Only undoing Greg's curse and destroying Wolfern before the next full moon can save their love and their lives.
Mari Hamill blends fantasy, intrigue, and passion to create a chilling, unique story.

My review: First off, let me just say that I love the cover illustration. I'm always a sucker for a good illustration, and this one reminded me of the ones I used to see in a Tales from the Crypt episode.

Catherine is a bakery owner and in a stalemate in the dating scene. To her, "dating brought more pains than joy." (LOC 241)

Being a Werevillian and living in a town that had festivals celebrating werewolves practically dedicated Catherine's whole live to the shifting dog.

"The moon is like a yellow werewolf fang biting the heavens." (LOC266)

Evidently, Catherine had a warning that a wolf man might come looking for her. Then a strange man comes into town and somehow Catherine gets casted for the movie, Werewolf Nights, prompting her to gain the attention of a movie star, who seems to have a dark side.

At this point, I'm thinking that we're finally going to get some answers here. Instead, all I got was more ambiguity and a lengthier prose.

The werewolf lore was interesting. Writing was smart with blends of dark poetry and historical lessons. The story might've combined elements of mystery, horror, and classic noir. It definitely had that masking allure that attracts the reader like a moth to a flame, but I just couldn't get past the lack of clarity. The way it reads made me wonder if this was a town of real werewolves. It certainly sounded like it sometimes. The whole thing was just too complicated, which was further exacerbated by various characters coming in and out of scenes, removing the focus from the main character. I just didn't like it as much as I thought.

My rating: 2 stars
Posted by Sandra's Book Reviews at 9:01 AM