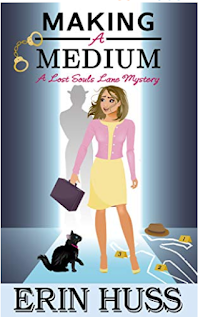 At 23, Zoe Lane was ready to “enter the work force, gain independence, and maybe even move out.” Unfortunately, jobs were hard to come by, especially in a small town like Fernn Valley. Then it hits her—the car. While nursing a mild concussion in the doctor’s office, she gets harassed by a cranky—albeit handsome—guy in a hat. It would seem that this guy was stalking her as he was appearing everywhere she went. Turns out he was more than a stalker—he was a ghost! A ghost that, apparently, only she could see. Of course, she thinks she must be going crazy. But rather than being sent to the loony bit, she decides to play it cool and pretend she doesn’t see him.


The guy apparently won’t leave her alone until the job gets done, and the job is to find out how he died. Even though he was really old at the time of death, the guy can’t shake the feeling that he was murdered.


So now only was Zoe living under the strict rules of her parents, but she was also being bossed around by Casper, the cranky ghost.


Witty and crafty, Making a Medium is a quirky and fun mystery. Zoe can see the dead, hear thoughts, and get into some funny trouble. She never wanted to be a medium, but she learns to accept it, not really having a choice. Little by little, she learns how to harness hew new psychic abilities in naïve and blundering attempts. It’s quite a kick. Not only does she learn how to be a medium and solve mysteries, but she also learns how to be an adult from a ghost. As she stated, she’s not particularly good with people—dead or alive.


It’s simple: Willie wants solve his murder and Zoe wants to get rid of his pushy ghost. And the two are getting on each other’s nerves.


I enjoyed the snarky banter between Zoe and Willie as they disagreed about a lot of things (i.e. her clothes, her sheltered life, the fact that she can’t drive a car.) I especially liked how they commiserated on how life is now and how life was back then. Example: [Willie]: “When I was your age, a woman was called a woman. People are too easily offended these days.” [Zoe]: When you were my age, Nazis occupied Germany.” Such biting wit! I could seriously see this as one of those slap-stick comedy movies.


Full of mystery, quips, and zany twists. A hilarious read!