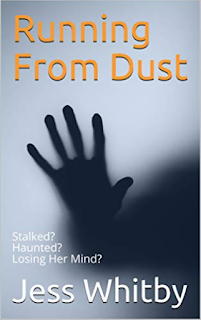 Jude Craig is a level-headed teacher in a Yorkshire secondary school. Within a matter of days her professional and personal life is shattered by a series of strange events in her house. What starts with the sound of papers fluttering to the floor quickly escalates to her discovering that someone has been in the house whilst she is sleeping. When Jude is driven out of her job and home she is forced to discover whether she is being haunted, stalked by a pupil, or the terrifying possibility that she is losing her mind.

My review: Jude can’t sleep. Every night, she’s been waking up in a fright from the sounds she hears in the other room—the sound of paper rustling. Was it an intruder? But there was no one there. Perhaps it was her imagination. At first, she ignored it, but then the sounds continued.

A speculative quandary with many possibilities.

The writing was simple, and Jude’s mystery was alluring. I mean, it could’ve been anything. The plot listed so many different variables that could’ve led anywhere. Was a student crushing on her? Was he watching her at night? Or was she just imagining all of this?

The whole point of this story revolves in trying to conclude whether this was a stalker, a haunting, or insanity. This was a nice, little mystery, provoking the reader to seek the answer to the story’s question; however, it didn’t really quite rise to the occasion. I thought it could’ve been more exciting, but instead it lagged in some areas with lengthy prose and far more details than was necessary. I also questioned whether the other characters’ POV contributed to the story, because, to me, it seemed irrelevant. Yes, they might’ve lent a small piece to the mystery as a whole, but perhaps they didn’t need to be too in-depth. Also, the simple cover doesn’t engage the intended audience as well as it should.

The author has a nice build-up toward the end as readers learn more of the nitty-gritty of this complex puzzle. Overall, story was pretty good, but I think it could’ve been better.

Tuesday, 13 November – 1:18 a.m.
Jude sat bolt upright in her bed. Oscar jerked his head, stirred by his owner’s sudden movement. He looked from her to the door, then back to her. Jude’s brain sped through a storyboard of images. Faster than a speeding, out-of-control train, she remembered the events of the night before. The sound. The paper. An intruder or her imagination? Remember—check the office in the morning. How did she forget all this? How could she be so stupid?

She held her breath and listened intently until her head began to hurt. Oscar sat up.

Oscar gave a small whine. She waved at him to be quiet. Again, she listened. Silence.

Jude closed her eyes and laid back in the bed. Was she losing her mind?

The sound of a piece of paper falling to the floor broke the silence.

Jude jumped out of bed, took a step towards the door and stopped. This may not have been the best idea. What if there was someone in the office? What would she do? But how could she ignore this? She knew what she’d heard. And not once. It had been more than once. What the hell was going on? Frozen to the spot, Oscar looked on.

As if in reply to her hesitation, the intruder responded. The sound of another sheet of paper falling to the floor came from the office. Jude sprang into action. Not into the office but backward further into the bedroom. She switched the bedroom light on. The bulb illuminating the darkness with dazzling bright light.

“Hello?” Jude tried to sound confident but she could hear the slight wobble in her voice.

“I know you’re in here,” she continued, sounding more confident. “You have ten seconds to leave my house or I will phone the police,” she lied.

The phone sat on the other side of the room, on top of the drawers as it had last night. Out of arm’s reach. Damn.

Posted by Sandra's Book Reviews at 9:03 AM