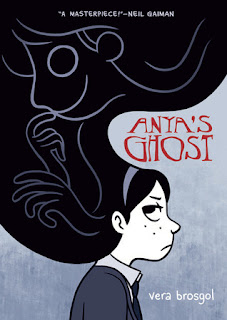 After a miserable day at school, Anya falls through a hole and finds a ghost that can’t leave her bones. Upon getting rescued, she accidentally takes one of the ghost’s fingers in her book bag. Now, she has a ghost on her tail…literally.


Story had such comedic scenarios, like the ghost popping out her pencil while Anya was trying to take a test in school. Anya is a funny and spry girl, but, like any teenager, she often feels misunderstood and out-of-place. I loved how she faked a period just to get out of church. “You can check if you don’t believe me.” Ha, ha, ha.


The haunting story of the ghost’s murder was touching and illustrated beautifully. But when Anya agrees to solve the ghost’s murder, she soon realizes that the ghost was not telling the whole truth. The bubbling mystery explodes to a climactic ending with awesome renditions.


Witty and fun! Illustrations were awesome, and the humor was something right out of The Simpsons.