Review: NUTSI WANTS TO CATCH THE MOON by Emma Paidge 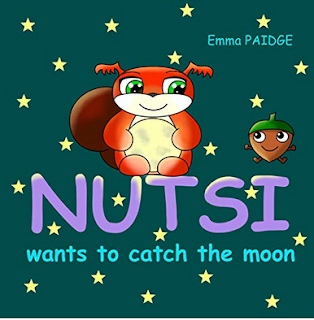 Nutsi, the squirrel, likes to look at the moon. He has a terrible secret: he’s afraid of the dark. VERY afraid. So, along with his friend, he goes in search of a way to catch the moon.

Nutsi doesn’t really look like a squirrel. Instead, he was kind of a cross between the mushroom on Super Mario and the Southpark characters. Although they were cute, the illustrations were child-like. They were kind of stiff and lifeless, and the text could’ve engaged more with the pictures to create more vitality.

Story itself was okay, but I just think it could’ve been more entertaining with a better layout and nicer art.