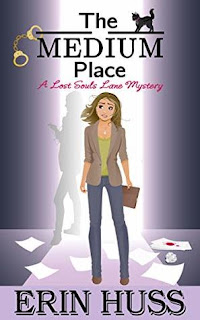 Zoe Lane, the girl who sees dead people, is back!


Still being new to the medium gig hasn't stopped her from working her dream job at the The Fernn Valley Gazette. But when a ghost appears (literally) right in front of her, she has no choice but to help. The ghost's name is Penelope, and while the last ghost was restored to the age of his prime, this one carried a wound in her abdomen. A wounded ghost?


As quickly as this story begins, Zoe starts to wonder if the ghost is not actually dead, but rather close to death. Mmm, interesting. But, of course, this would have to be an attempted murder. And Zoe must find her before she dies.


In an effort to help, Zoe somehow manages to make herself the prime suspect. But it seems nobody will take her word on account that she's Looney Lane.


A good, light-hearted mystery.  Although the quips did not come as often and the case was a little more complicated than the last, Zoe still delivers with warmth and wit.  I definitely liked the first book better.