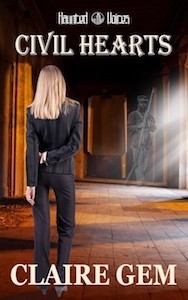 Olivia Larson, recently widowed after the death of her husband, was looking for a fresh start in a new town, which prompted her to purchase a 2-story mansion that dated back to the Civil War.

“It was actually one of the details about the place that appealed to me. A project, I thought. A blank canvas I could redesign to suit me. The new me. Whoever the hell that was.” (7)

But still what could a Manhattan career woman do in a small Alabama country town?

Soon she starts hearing noises from the house called The Belle Bride. Images of a strange man in a military uniform appear before her. Mystery gets more involved as historical details of the mansion begin to surface.

Colored in somber tones, this lyrical and well-written story carried a haunting atmosphere, which correlated with the ghostly apparition that traipses through the historical mansion. Like the Southern setting, it moved at a drawling and leisurely pace. The story was a little slow at times, but the good writing overrides the overall lag. Rich in detail and historical significance, story really makes you weed through the cobwebs to follow along. Obviously, the most interesting facet was the ghost and the mansion’s dark past, which would entice history buffs and mystery readers.  It’s a pretty good story.