Review: HAPPY EVER AFTER by Seb Earl 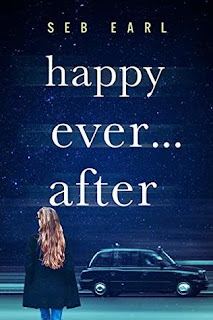 When Emily wakes up in the middle of her bed, shaking and sweating from yet another nightmare, she knows it will not stop easily. The sexual assault she suffered eight years ago has left an enduring mark on her mind.

In the immediate aftermath, she moved back to live with her parents and, since then, they have happily provided sanctuary. But at what price? Emily is not free, and her inner doubt and anger are increasing their stronghold over her life.

Thrust into action by her best friend, Sarah, Emily finally finds the courage to move out and start a new life on her own. She soon meets Olivier, a charming French man.
As she realises how her future happiness depends on her ability to face the past, Emily begins the slow, and at times painful, journey to finding inner peace.

But can she truly put her ordeal behind her? And is everything exactly as it appears?

My review: After a sexual assault, Emily returned home to live with her parents. "Night curfews, set times for meals, and endless questions about her love life would result in growing anger." (3)


"Her 'monster' was a wild beast that lived insider her head, feeding on her doubt and pain." (3)

At 30, memories and nightmares of that night still plague Emily. "She let her body be invaded. Her whole being had been contaminated, polluted by unwanted touch." (21)

Words held a violent force that was deep and impactful. Story was of a damaged woman battling the black holes of trauma and despair. That, along with society's archaic views, fueled her anger. This was a woman trying to survive a mad world.

Dark thoughts were taking her over. Who knew what she could if she couldn't control her temper? Why couldn't she just forget? Why, instead, was she living under the scrutiny and control of her overbearing parents?

Her friend's solution: move out.

Although frightened to be on her own for the first time since the attack, Emily bravely ventures to start her life over again. Soon, she becomes romantically involved with a Frenchman.

At first, I thought this would end up being like a psychological thriller with Emily's "dark thoughts" taking over somehow. I thought that's where it would naturally lead, because, after all, there was some psychological trauma after Emily's sexual assault. Instead, this was more about a woman getting her life back together again, which was fine. I honestly didn't understand why Emily would get involved so soon or get involved at all what with her strict and cynical views on marriage. The whole thing kind of slowed dramatically for me about 1/3 way in (right after she gets involved with the Frenchman.) It started off well, but then it came to a stalemate. It was much more drama than suspense, and I honestly would've preferred it the other way around.