Review: GRASPING FOR GRACE: NEVER GROW UP by D. Pichardo-Johansson 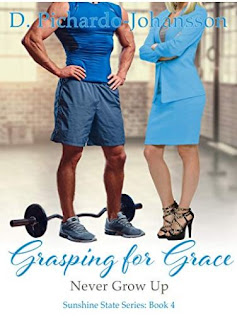 "Why do I hate men? Because they did nothing to deserve their good luck. Winning the genetic lottery of a Y chromosome was all it took for them to get world supremacy, freedom from the period, and the good side of all double standards.” (2)

To Allison, it just seemed that men had it easier in the world. It’s true! And that’s why she can’t stand the syrupy couples or the obligation wedding. Who needs to be glued to a guy, smooching and giggling? And how dare her friends insinuate that she wasn’t happy by herself? After all, she’d written bestsellers telling women that they could be. Right on, sister!

To quote her book: “Marriage is the ultimate happy ending: It ends your happy.” (24) =D

Like Allison, I wasn’t an “example of the eternal story: the moment a woman fell in love, she lost herself, her independence. Her power.” (33)

Then it hits her…Or she hit him actually…accidentally with her car. And what a charming bastard he was. Feeling her up (literally) to check if she was a hallucination and manipulating a dinner date.


What  on earth  is  happening  to  me?  She was  the  woman  who found men nearly disgusting. Why was she finding this stranger so attractive? (8)

Neither one believe in codependent relationships and neither one was backing down on their views. Still, Jay was determined to prove his point no matter what.

Uproariously funny and witty, story was an unconventional love tale of outlandish remarks, mounting frustrations, and easy laughter. I found this book very entertaining and relatable. It was a Battle of the Sexes. These characters have always believed that they were on opposite teams, but they will realize that, deep inside, men and women are actually the same.


“The point of this long story, darling, is: when your inner compass tells you you’re in the right place, don’t question it—even if it doesn’t make sense at first. Keep doing what brings you joy, and it will make sense in time.” (47)

The interesting aspect was the childhood regression—remembering what made you happy as a kid and using it in your present endeavors. It’s pretty hard to find happiness in a bleak childhood, so, needless to say, the repressed memories naturally manifested into distrust and cynicism. Clearly, Allison and Jay both needed Freud and a couch (don’t we all, right?) I was also curious to know if Allison could really be the Grace that Jay used to know as a kid.

Although it was a smart novel, sometimes it was a bit too analytical. Characters mindlessly drift through life with their load of haunting memories, repression, and subconscious beliefs. Jay certainly takes his “grasping for Grace” to stalking and near-psychotic levels. His attempts become asinine. I mean, getting her to sign up for his Boot Camp Workout Program? Geez! For me, the Boot Camp is actually where it started to taper off. I thought the premise was interesting, the story was well-executed, and the progression was slow and steady.