Review: DUE DATE by Nancy Wood 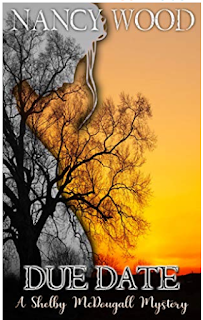 Surrogate mother Shelby McDougall just fell for the biggest con of all: a scam that risks her life … and the lives of her unborn twins.

Twenty-three-year-old Shelby McDougall is facing a mountain of student debt and a memory she’d just as soon forget. An ad in Rolling Stone for a surrogate mother offers her a way to erase the loans and right her karmic place in the cosmos. Within a month, she’s signed a contract, relocated to Santa Cruz, California, and started fertility treatments.

But intended parents Jackson and Diane Entwistle have their own agenda — one that has nothing to do with diapers and lullabies. With her due date looming, and the clues piling up, Shelby must save herself and her twins.

As she uses her wits to survive, Shelby learns the real meaning of the word “family”.

My review: Shelby is pregnant with twins. And when the due date comes, she would be giving them away to the intended parents. Not many people would consider being a surrogate, but Shelby was facing a mountain of debt and the couple was willing to pay her. She thought she was helping a nice, loving couple. She never expected to fall for the one of the biggest cons of all.

A frightened woman, a major scam, and a looming due date.

This story certainly had a captivating premise. I was hoping to learn about Shelby’s financial struggles and how she came to be a surrogate. Instead, the book starts off with her already being pregnant and getting lost in the woods. It felt like I was kind of thrown in the mix there.

The writing is very heavy on description. You could tell that it was striving for a literary and reverent style with its emphatic focus on character emotions and pastel scenery. Although the words were lovely, I also thought that it was a tad too wordy. It just became very stifling. I wanted the story to move on, to keep going, but it just wasn’t moving fast enough for me.

The Beemer driver, right on our tail, tapped his horn a few times, and sat on it. My brother Dexter swerved the SUV toward the dented guard rail separating the gravel shoulder from a steep drop into the Santa Cruz mountain valley below. But the BMW driver didn’t take the hint. He just edged closer, veering in and out of the lane, still trying to pass.
“What the...?” shouted Dexter as the Beemer’s right front fender hooked our left rear with an explosive crunch.
Suddenly we were sliding out of control, skidding across the narrow road as if it were black ice. Dexter fought the wheel and pumped the brakes, but the pedal plunged to the floor. Yelling “Hold on,” he yanked the parking brake.
Metal screeched and our CRV fishtailed to the right, jerking to a halt inches from the cliff. Dexter turned the ignition off and there was welcome silence.
He whacked the steering wheel with the palm of his hand.
“I am so dead,” he groaned. “Jessica is going to kill me.”
He reached over to unclip my seatbelt then looked at me, horrified. “Shelby, we need to get you to a doctor.”
“I’m fine,” I said, cradling my substantial belly with both hands. “Thank God the airbag didn’t go off.”
“If I ever catch that idiot...” Dexter tried to start the car but the engine just whirred, clicked, and died. He swore, wiggled his phone out of his pocket, pressed the on button, and swore again. He shook it, as if that would help. “Can I try yours?”
“If you can find it,” I said. I gestured behind me, where my entire life was crammed into boxes, suitcases, and duffel bags.
“Don’t have that much time. Gotta get you and those babies to a doctor.” He opened the car door. “I’ll be back in a half hour, tops,” he said. “Don’t go anywhere.”
He grinned at me. We both knew I wouldn’t.
I watched his bright red t-shirt disappear through the redwood grove up the twisting road, under the blue California sky. He’d be at least an hour. Dexter never could tell time.
I angled the seat back and was rewarded with the familiar poke of a baby foot between my lower ribs, then another on my left side. See? I wanted to tell Dexter, we’re all fine. All three of us. And just because you’re my big brother, you can’t always tell me what to do.
I reserved that privilege for Jackson and Diane Entwistle, the intended parents of my unborn twins. Although we didn’t know each other that well yet, Diane insisted on taking me in now that Jessica, Dexter’s pushy wife, had kicked me out. So instead of being shoehorned into an all-purpose office-guest-craft room, I’d have my own cottage. Six hundred square feet all to myself on their expansive Santa Cruz mountain ridge top estate. Even though the arrangement would only last a few months, until the babies were born, I was looking forward to quiet country living.
I locked the doors, twisted around in the seat for my purse, and busied myself in a fit of organization. I excavated gum wrappers, used movie tickets, wadded up tissues, balls of hair from my brush, bits of broken shells I’d collected on my morning beach walks, keys to Dexter’s house that I wouldn’t be needing anymore, and a dangly red and white African beaded earring I’d assumed was long lost. The trash went in one pile, the earring in my coin purse, and I stashed the keys to my former life in the glove box.
I’d just have to remember to tell Dexter they were there.

* * * *
Forty-five minutes later, I was flipping through the Sunset magazine I’d found under the passenger seat when I smelled smoke.
Campfires weren’t unusual up here in the hills, where there were at least three state parks, and at first the tendril of what looked like mist winding through the upper redwood canopy didn’t worry me. I was reading about kitchen makeovers, something I couldn’t yet imagine at twenty-three, but maybe someday, after the babies were born, after I finished graduate school, after I found that perfect guy.
Then I started coughing. And I looked up again. The smoke was as dense as beach fog on a summer morning. This was no campfire.
I felt a sudden surge in my throat: on the side of the road, near the hairpin curve where Dexter had disappeared, licks of red and orange flame were traveling lazily up the trunk of a spindly shrub. I jumped as it ignited with a crack, sparking in fiery traces like a welding torch.
As quickly as I could, I unlocked the door and eased out, trying not to look down at the slope as steep as a ski jump that dropped off beneath my feet. Only an inch of slippery gravel lay between the toes of my flip-flops and the lip. I baby-stepped around the car, taking peeks up the hill, hoping I’d see Dexter running toward me, arms outspread in a victory lap.
If you wanted something enough, the universe would provide, right? But only a backdrop of flames glowed through the swirling smoke.
Now whole trees were hissing in the distance as they burned. A power line sparked in a deafening pop. I looked around for my best escape route. I couldn’t follow Dexter. No one could navigate that path, not even a fully-suited firefighter with an oxygen tank. I knew Dexter was somewhere safe by now. Probably as worried about me as I was.
I waddled fast downhill, and ten minutes later, I was in almost-clear air again, the blaze just a memory clinging in sooty, sweaty rivulets to my hair and clothes. My eyes still burned and my tongue felt singed, but a familiar blue sky arched above and the feathery ash only floated down occasionally, gentle as mist.
I knew it would be just a matter of time before the fire caught up to me, though, and I couldn’t walk forever.
As if my prayer had been answered, the faint whine of an engine percolated the still afternoon. Gears ground as the vehicle labored up the grade. I dodged off the road and crouched behind a tree. Maybe it was the hormones, but paranoia had been a constant companion since I signed my surrogacy papers. Nobody liked surrogates, I’d learned, especially once they realized the amounts of money involved.
But I needed a lift. Shaking off my worries, I straightened up, ready to flag down the vehicle. “Shelby Emma Stearns McDougall,” I said. “Get a grip.”
Above me, a pair of crows squawked, raspy and piercing. I adjusted my huge belly, leaned back against the tree trunk, and waited.

Posted by Sandra's Book Reviews at 8:08 AM