Review: YOU MAKE ME by Erin McCarthy 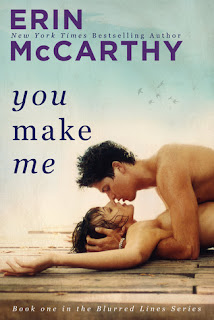 Cat has never been the same ever since she gave herself to the man she loved on the beach shores and never saw him again. Well, that explains the provocatively sexy title cover!

Now a college student, Cat is dating Ethan, who is safe in every way (no drama and never made her cry.) And on the night of her marriage proposal, he walks back into her life. Heath was her first love, her soul mate, her heart breaker.

A girl loves two guys, but which is the one for her—the one who holds her future or the one with the key to her past?

I don’t blame Ethan for being jealous of Heath, but, man, did he have to be a jackass about it? Possessive, suspicious, controlling—I mean, really? It was no doubt that those millions of cracks in their relationship eventually shattered the glass.

Heath was  a world of passion. He understood Cat more, I think. I liked how Heath pushed (not allowed) for Cat to be herself—to be low-maintenance, simple, wild, and carefree. That’s the best way to be.

Still, you can’t help but get sucked into the craziness.