Review: WITCH IS WHEN IT ALL BEGAN by Adele Abbott 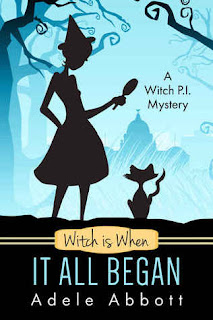 This is a Witch P.I. Mystery, which was all the more compelling.
Jill Gooder wants to be the best P.I. ever, next to her late father, of course. So what if she was adopted? He was more of a dad than either of her real parents.

It’s been kind of slow in the P.I. business, until a client comes in and wants to hire her. So what if it’s a serial killer case? Whatever pays the bills, right? But this one is kind of loony. Apparently, someone is killing off people with animal surnames. Mmm, weird.
But then, out of the blue, her birth mother contacts her, wanting to see her. Her final words on her death bed were: “You’re a witch.” What?

Now Jill’s world is turned upside down. My god, cats are talking to her now!
But then she gets the hang of it. Jill was a quick study and soon learns that being a witch was fun. I liked Jill. She was funny, quirky, OCD, and magical. But it seems solving a serial killer case may not be the only thing on her mind. Apparently she must also escape the forces of darkness, too. Sheesh!

This was definitely a fun, light read, but I found the ending to be quite anticlimactic. I was like, “that’s it?” It felt like a rip-off, if you ask me.