Review: THE STORM by Amanda McKinney 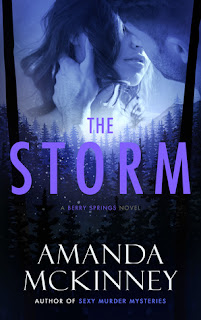 Ever since it happened, Dean hasn’t been able to forget about his father’s death—his murder.


Six years later, Dean discovers a body abandoned in the middle of the road, killed the same way as his father—with a bullet through the forehead. A proud member of the Berry Springs Police Department, Dean takes an investigative approach to the fresh crime scene, wondering who would want to kill him and why the body was left in plain sight.


On the case, Dean realizes that the deceased was none other than Clint Novak, an old school friend from the same town.


When Heidi woke up in the middle of the night and realized her husband was gone, a sickening dread settled within her. The death of Clint’s death was a shocking moment. Who would want to murder her husband? And why was the killer after her now?


It was a puzzling quandary for Dean, who wanted nothing more than to protect the grieving widow, whom he was captivated by .But, for Dean, “women come and go,” and he certainly could never fall for her. Could he?


Story was well-written and interesting, for the most part. The police investigation was slightly daunting, and there were a few too many characters for my liking. There was also a certain degree of complexity as bodies and clues sporadically appear amidst a dreary winter storm. The fact that Dean was so entranced by Heidi’s quiet elegance and beauty in a frightening and devastating time added a human empathy to an intense tale. I liked the deep connection between the two characters. Although I understood wanting to create scenes full of intensity, anxiety, and passion, I thought that the overall pace was lagging. It wasn’t that necessary to describe the antiquated mansions and desolated forests with such intricate detail. I think all that made it slower. But I’d still say this was a pretty good suspense tale.