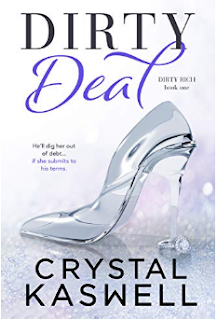 Cash-strapped Kat is looking for nothing more than a job. With bills, mortgage payments, and now her sister's tuition, Kat is willing to do "whatever it takes." Then comes the alluring Blake, who oozes money, pure sexiness, and is also the CEO of the biggest tech company in New York. He also makes her an offer she can't refuse. But what could he possibly want with Kat? Besides the obvious of course...Yes, he wants to f#ck her, but he wouldn't pay her for that; he'll pay to marry her.

If the rich mogul is willing to make all her problems go away, it might be worth 6 months of her life...for a million dollars.

So what happens when a virgin and a man that commands anything get involved? Things get dirty. After all, a girl could do anything for a man with all the money and power in the world...right?

The story follows Kat as she is tossed into a world of glamour and chic. She basically puts on this Cinderella suit for all to see. That world can honestly be stifling and dull. But I guess Blake more than makes up for it with his dirty deal. The two mostly engage in dirty foreplay, orgasmic flutters, and sexual jaunts. The writing was okay. Yes, the talk is dirty, but the scenes seem to go on forever, summarizing things like a point-by-point bullet list. It really didn't seem like things were moving along much at times. The sex, which has some BDSM, can be intense and pleasurable, and I liked the whole Cinderella theme (poor girl being whisked away by a rich prince;) however, the whole thing felt average and not too exciting.

Posted by Sandra's Book Reviews at 8:39 AM