Review: THE CHAIN OF LIES by Debra Burroughs 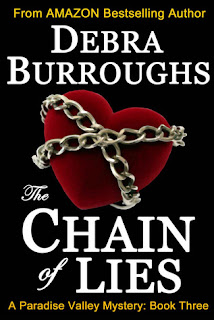 Ever since her late husband’s death, Emily has been having nightmares. Ironically, the murder of her husband, who was a brilliant P.I., has, ironically, gone unsolved. But what gets to her most was that “he kept a whole tapestry of secrets from her—including his real identity.” (LOC 57)


Emily can’t move on with her new boyfriend until she—a kickass Charlie’s Angel—can solve his murder and put her nightmares to rest.


This book struck me as an inquisitive mystery, one I thought I would look forward to unraveling.  Although this chain of lies does unravel piece by piece, it also somehow deviates to a prostitution ring, which I thought was irrelevant. A lot of federal logistics slowed the pace dramatically, making it harder to keep up. It makes you wonder what the real mystery was.

My rating: 2 stars
Posted by Sandra's Book Reviews at 8:39 AM