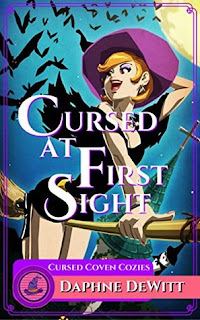 Every Norwood witch has a curse, and Malady’s is the worst one in the family. She can’t fall in love or be close to feeling in love without causing some disaster to the people she cares about. She was the black cat.


Over the years, Malady has come to terms with her curse and has learned to control it, for the most part. As long as she suppresses her happiness, everything should be fine.


Suddenly, there’s a murder in town. Her old school nemesis has been thrown off a building and her old school crush (her first love) is the prime suspect, who claims that he remembers nothing and, somehow, he felt compelled to be with the victim. Like he was under some kind of spell. Naturally, Malady suspect magical foul play and sets off to prove his innocence.


The Norwood witches were an odd bunch with lovable eccentricities, each with their own curse. I mean, we have twins that share a voice, a brother trapped in bodies of winged creatures, and a sister that’s just too perfect all the time. It was fun to read about them.


Story had witches, clairvoyants, and ghost whisperers. A charming mystery!