Review: TWENTY-EIGHT AND A HALF WISHES by Denise Grover Swank 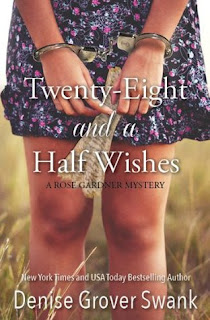 A vision of death. A public meltdown.


When Rose, gifted—or cursed—with the sight, sees a vision of her own bloody death, what’s a girl to do? Have a humiliating meltdown at work, of course. Up until then, she has always been the freak that usually had visions of overflowed toilets and ear infections; she has never foreseen death, especially her own.


All her life, Rose has had someone controlling her, especially with an overbearing mama and an overprotective sister. “No excuses were acceptable, not even illness.”


Her latest vision along with her slave-driving mama evokes an epiphany: that she was frittering her life away. So she makes a list of things she wants to do before she dies. 28 wishes (her list actually went to 29 with the last item being left blank.)


Just before she can embark on her journey, she comes home and finds her mama dead on the couch—the very couch she saw herself in her vision. It was supposed to be Rose lying dead on the couch with a bashed skull. Not only must she contend with the guilt over her mama’s death, but she is also accused of her murder.


This is the story of a frightened, young woman’s search for independence while battling the menacing glares of a lynch mob community and finding a killer. Story was well-written and full of emotion, drama, and mystery. Story was a “Frankenstein”—an unknown entity comprised of different parts.


What genre would this book fall into? Each segment is so out-of-place that it’s hard to pinpoint what this story is truly about. At first, I was enjoying all these elements that were oddly put this together, however, it got to feeling much too scattered and the pace was rather slow.


This story had potential of being a really good read, but it just didn’t make it there.