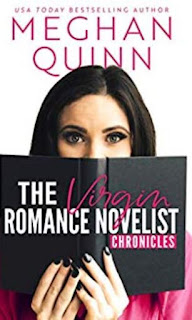 Rosie wants to pursue a career as a romance novelist, often referring a “Briar’s patch” to a lady’s peaceful pleasure garden. Oh brother.


Needless to say, she has never experienced the pleasures of the flesh and has always wanted to see a boner, wondering what would happen if she were to touch it.  So the plotting was set: a virgin writing her first romance book.


Her doting friends think she needs to get f*cked or she’ll never be able to write this stuff. The mission was set: get Rosie laid.


In her mission to lose her virginity, Rosie keeps a sex journal to record her thoughts and feelings, which would be useful in writing her book. She becomes an eager student in the art and study of sex. How sweet of her friend, Henry, offering to show her his penis.


I enjoyed seeing Rosin fumbling in these hilarious situations, like kneeing a guy in the groin (accidentally, of course) and throwing up on a man’s genitalia. She’ll face demonic cats and floundering first dates.


It was sweet how Henry becomes jealous and overprotective of Rosie—he loves her after all. But Henry wouldn’t want to ruin their friendship, right? Still, the moments between these two were often sweet. Why couldn’t they just admit that they liked each other?


Sometimes the friends shared a little too much in their sexual knowledge and exploits. It was too explicit for my taste. And, although the klutzy disaster dates were enjoyable, they were getting a little tiresome, too. Okay, I get it, Rosie was a flop on dates. How many did we have to go through already? So this was where it started to taper off. Geez, how long was this? Evidently, this book has a few parts and very LONG chapters.


I’d say this book started off pretty good with a captivating and witty premise, but it just waned on me.