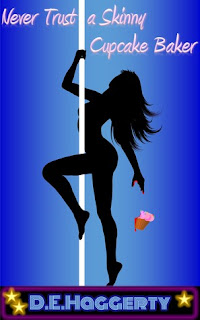 Callie is a bakery owner with a size 14 body and the hots for the local detective. To make her see her sexy side, her friend enlists her for pole dancing classes. Yikes! Well, it wouldn’t be so bad if the skinny pole dancing instructor would stop picking on her and calling her fat.  In short, Calling was short, overweight, and a total nerd, so, therefore, there is no way that hunky Ben would want her. But he does. In fact, the first part of the book concentrates on Ben and Callie starting off, which was a slow start.


We don’t get to the mystery at all until Chapter 7, where we find that the pole dancing instructor has been poisoned supposedly by one of Callie’s cupcakes. So, naturally, she’s the prime suspect. To save her job at the university, Callie then must prove her innocence.


Story was mildly witty and had a fun, little mystery that includes pole dancing and gyrating your stuff. I thought Ben was too clingy though. Almost every one of his scenes included his claim on Callie, professing how it took him a year to get her and how he wasn’t going to lose her. O-Kay!


Still, I wanted to know whodunit.