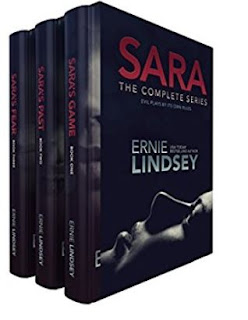 Compelling from the start, the game begins with Sara’s three missing children. An anxiety-riddled mystery greets the reader and whisks you away on a fast-action thrill ride of craft and intellect. Sara was like Bruce Willis in Die Hard.

Could Sara’s husband, who went missing years ago, be involved? Or is it a jealous, competitive co-worker who’s behind this calculating scheme? I loved the riddles and clues. They really made you think while combating the clock.


I also liked how it incorporated video game theory and analogy.


An exciting read! It makes me want to continue the series. What other games await Sara?
Sara's Past (Book 2) - Four bombs in four countries. Could Sara's past have anything to do with it?
Turns out an old high school classmate is looking to even the score.
Sara's Fear (Book 3) - Two dangerous psychopaths and one mother's fear. It's Sara's worst nightmare yet. Shelley Sergeant (Book 1) and Patty Kellogg (Book 2) team up to get revenge on Sara.
Best one in the trilogy and a grand finale to the series.
My rating: 4.5 stars
Posted by Sandra's Book Reviews at 7:38 AM