Review: THE LEFTOVER by Brooke Williams 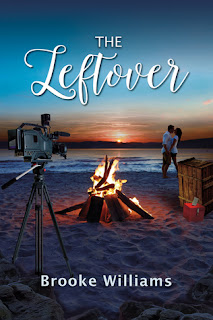 The last thing Megan Malone would do is go on a reality TV show. That’s not exactly what the wire-frame, “frizzy mess” Megan saw herself doing. But when her newly pregnant sister drops out of a Survivor-style show called The Leftover, she really had no other choice. The show could be the start of a whole new world…or be a completely embarrassing disaster.


Megan was never described as graceful, athletic, or social in any way. In fact, “the most interaction she had with the opposite sex was when the pizza boy—pimple faced and barely legal to drive—delivered food to her house.” (6) I liked Megan. She was cute, shy, and quirky with that “subtle sarcasm”—the everyday girl. Kind of reminded me of me.


Then along comes Cane, a paramedic and a former contestant on a reality dating show, who still harbored a broken heart for the woman he thought he loved. “He was every woman’s best friend and no woman’s soul mate.” (14) In trying to forget about his past and move on, he’s stuck being the medic for this show, but it may not be as bad as he thought once he meets Megan.


In preparation for the show, Megan must succumb to tasks she would’ve never touched with a 10-foot pole. And when she meets the competition, most of them looking like gladiators, she realizes that she was way over her head. “Did Megan have the right intuition to know who was lying, who was forming alliances, who could be played, and how?” (53) Talk about being on the “wrong side of the numbers.” Fortunately, Megan has the alliance and support of Cane. Looks like Megan might have more to win than she thought.


A well-written, down-to-earth story full of warmth and hilarity! It’s a tale that pushes the boundaries and tests the limits. Emotions rise high when the game turns more into a battle zone with alliances forming and enemies surfacing. Who will be left standing on this Cast Away island? There may have been a few too many characters to keep track of and sometimes the game got a little confusing.  You actually feel like you’re watching an episode of Survivor with behind-the-scene shots, cast commentaries, and elimination rounds. Over the course, this starts to get a bit daunting (I was never much into reality shows.) But, still, the main focus was obviously on Megan and Cane, which had the endearing story line.


Audiences will cheer for the lovable and awkward Megan as she jumps through outrageous hurdles. She may not fit in with the crowd, but she’s no push-over either. A fish out of water with no clue, she trudges along, picking up as much as she can, taking it one step at a time—“one foot in front of the other.” After all, that was all she could do. Story is a wonderful beacon to the catch phrase: “I y’am what I y’am.”


Overall, this was a fun and light read.