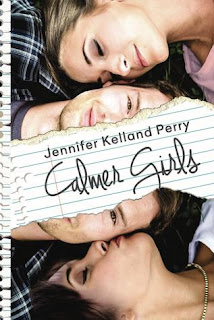 "Insecure people wear masks, to impress, to fit in, to hide, and to protect sensitive emotions. [Samantha] could relate, often cocooning herself in an aura of indifference and detachment she only pretended to feel. Regrettably, it was a facade [her older sister] Veronica usually knew how to penetrate." (11)


Samantha, along with her sister and mother, have moved to Calmer Cover (Calmer for short), and she's about to start school in Sept. On the first day, she meets Ben Swift, who seems to share in her pain and resentment.


"Like it or not, she knew she had to accept this new existence she’d been handed, but the wounds of grief were still raw." (25)


Calmer Girls mainly embellishes on the relationship between the girls (mother and daughter, sister and sister.) It's a typical coming-of-age story of settling in a new town and harboring old feelings. Story had a lagging flow throughout, making it hard to be taken by it. Although the story was generally well-written, I just found Samantha uninspiring and dowdy. Veronica was just cruel and snobby, and the mother felt minor and insignificant.

I just found the whole thing to be rather dull.

My rating: 2 stars
Posted by Sandra's Book Reviews at 7:22 AM