Review: CHASE TINKER AND THE HOUSE OF MAGIC by Malia Ann Haberman 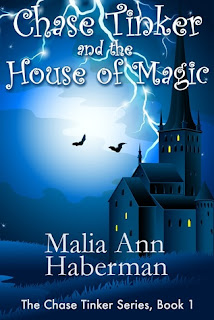 Ever since his dad disappeared, Chase Tinker has been nothing but a troublemaker, stealing and vandalizing. He knows it's wrong, but he just can't help being so angry. And why is it that every time he gets angry, things seem to move on their own? Could it possibly be magic? Real magic?


But it seems Chase isn't the only one freaking out about all these supernatural occurrences. His younger brother, Andy, can apparently stop time, freezing people in places.  What the heck is going on?


When a strange, old man appears at their doorstep, the boys learn that he's their grandfather and that their powers are part of the Tinker legacy. To learn more about their family and legacy, the grandfather invites the boys to the Tinker house--otherwise known as the House of Magic. There, they learn that each room in the house has a magical power and the source of their magic comes from a Relic, which must be hidden and safeguarded from evil. Evil?


It's then that Chase learns that his father was kidnapped for the family Relic and he would do everything in his power to bring him back. Will the kids be able to solve this strange mystery?


A crazy cross-over between Harry Potter and Alice in Wonderland. Most of the stuff the kids encountered was either cool, odd, or weird. Story was simple and generally well-written without the overuse of farfetched terms and complex language, but there was some lagging areas here and there. Nonetheless, I found this book charming and interesting.