Review: UNDER THE BED by Jeffrey Hurwitz 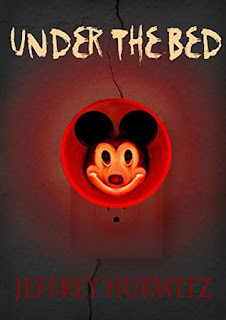 18-year old Jack Cross is a scared, little boy trapped in a quarterback's body. Every night he goes to bed and every morning he wakes up with a mask of horror, surrounded by the bloody remnants of a decaying man. Whoa, talk about some freaky sh#t!


What starts off as a compelling and psychotic rendition of Linda Blair on The Exorcist soon turns into a twisted and ambiguous story line. Was Jack a vampire? Was his bed-wetting issue part of his transition as a young boy? And what's all this about seeping into a dark underworld under the bed? Weird.


The element of the Mickey Mouse nightlight was both comforting and unsettling, for Mickey, "usually a symbol of good and fun" is still "a mere rat, savage and primitive." (20) I wouldn't be able to sleep either if I thought Mickey was trying to eat me. But was he trying to eat him, thus turning him into this flesh-eating beast? I don't get it.


Although the words were full of gaudy horror, the story was quite vague. It seemed that Jack was this self-made monster with an obsessive fear and repressed childhood issues. He really needed therapy actually.


I'd like to say that this would be a decent, scary story for teens, like those Goosebump books I used to read, but I just felt that there were too many holes in it, which could be translated to mystery, but, in this case, they were black nothings of confusion.