Review: STORIES FROM A TEACHER by J. Flores 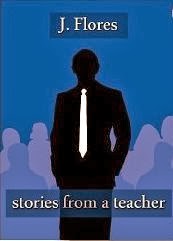 This book is just what the title suggests—stories from a teacher that are enriched with an honest and jocular tone. They are a brief recollection of a man’s career, a quest to bring knowledge and enlightenment to impressionable minds and to “save the world one-by-one.” (283)


In his first lesson plan, Jonathan learns to be flexible and “go where the learning happens.” (373)


In “My Answer,” Jonathan must battle his position of being “too young” with probing questions from kids and colleagues.


In “Where do I fit in,” Flores recalls being put in ESL classes as a kid because of his name, even though he was a native who was fluent in English. I know that feeling.


I liked how he relayed personal anecdotes into his lessons—that’s a good teacher! The obnoxious inappropriateness from the kids gave this book a solid dose of reality. It was amazing how the information goes in one ear and then out the other. Oy, kids!


I thought Flores had it right when he said that “there are fundamental flaws with the way these [kids] are being raised…These kids speak too aggressively…[and] instead of asking, they’ll declare.” (1542) That is so true! Sometimes I worry about society with kids being our future and all. It they are our future, then the world is in trouble.


These stories are a poignant and clever reminiscence; however, at times, the subject matter became too vulgar and obscene.


I was a little bothered by the overuse of the phrase, “I slapped my palm to my forehead.” In fact, a lot of these stories were quite repetitive. Some were not even stories; some were essays, letters, or just quizzes. Additionally, there were some issues on sentence structure, which was surprising considering the author was an English teacher.


Overall, this was an okay read. My favorite part was when he stated: “You must take care of yourself. You should be your own first priority.” (3128)


Teachers have to put up with a lot of crap by students, parents, and the school board, and Flores did a fairly decent job in showing that in his book. But, in the end, “is it worth it?” (3128)