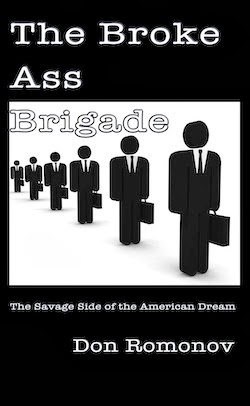 "The Broke Ass Brigade" is a sarcastic account of the employment of The author Don Romonov in one of the larger retail chains in the world. Don entered the workforce as a young man barely out of High school, full of enthusiasm and Idealism. He was soon to receive an abrupt reality check of what corporate America is all about. Raised in the middle class, Don believed in the value system of working an honest day’s work for an honest wage. That by doing what was “right” and working hard he had no choice but to succeed. The Company Store however had other plans for Don and his coworkers- the American working class. Terrorized by crazy and vindictive bosses Don manages to maintain his sanity and sense of humor while dealing with the masses that frequent the Company Store.

My thougths: From the very first page, you can’t help but laugh your butt off—it’s that hilarious!


From day one, Don has hated his job at the Company Store. He describes his day-to-day operations with vivid and humorous detail. The reader learns of incidents with customers, managers, and co-workers. “I just found it somewhat unfair that they could slack harder than I and get away with it.” (19) Welcome to the job! It’s all about a man’s struggles, working a dead-end job that he hates. It is an honest and cynical view of the work world.


The anecdotes come from the daily entries of his journal, which actually reads like it. Sometimes the writing was long-winded; the author tended to babble on and on. Why couldn’t he just get to the point? It was a LONG book.


The message: Work sucks! Yeah, like most of us didn’t figure that out already. But did you really need 500 pages to say that?
My rating: 3 stars