Review: HOW TO RID YOUR SWIMMING POOL OF A BLOODTHIRSTY MERMAID by Mick Bogerman (Slug Pie#2) 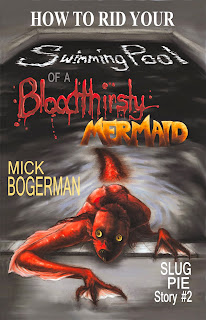 All Mick Bogerman wanted to do was teach his little brother how to swim in the coolest swimming pool in town. He didn't ask to take care of a bunch of Sea-Monkeys while he was there. He certainly didn't mean to morph one of them into a mermaid by feeding it genetically enhanced super food. No one is more surprised than Mick when the creature starts luring unsuspecting adults into the deep end of the pool. Adults who don't resurface. Join Mick as he battles a powerful adversary: a bloodthirsty mermaid who hypnotizes with a golden gaze, shatters glass with a piercing shriek, and reveals her true menacing self by the light of a full moon.

My thoughts: In the first Slug Pie story, we learned how to defeat zombie pirates. Now, in the second installment, we take a guided tour of how to get rid of a mermaid—not one like Disney’s Ariel, but one that feeds on human blood. Ew!


Let me start off by saying that I LOVE the cover. Totally awesome!


What I liked best was that this one read more like a story, but then, like the first book, it dives into a step-by-step guide. Again, it was like a Goosebumps book with all the youthful, boyhood humor. It follows the same pattern as the first book: Not scary, but just a fun kid book.