Review: A HUSBAND FOR DANNA by Christina Lorenzen 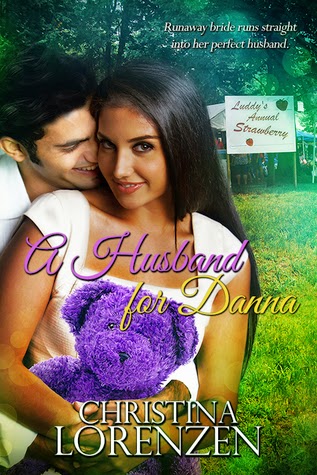 Off and running! In her frenzied quest to escape from a groom her father has chosen for her, Danna Rashba ‘borrows’ a limousine parked on Main Street. The last thing on her mind is finding a groom from another wedding in the backseat. What are the chances that the bride and groom from two different weddings running from the altar on the same day? The last thing Danna wants is a hostage as she tries to escape from her nuptials.

The last thing Eric Harmon wants is to be saddled with yet another spoiled, needy woman. He’s furious about this wrench in his plans, he accuses Danna of stealing. He wants to send her home in a cab as soon as they get to the nearest town, but Danna refuses. Much to Eric’s frustration, one thing after another seems to keep them tied together.

My thoughts: It all starts with the wild-eyed panic and heart-racing desire to escape—escape from a life of domesticity, monotony, imprisonment, A.K.A. “marriage.”  All Danna wanted to do was RUN. I tell ya, if I ever make plans to walk that plank, you can bet I’ll be wearing my running shoes (just in case.)


“Marriage was not a romance novel” (49) Of course not! It’s stressful, complicated, and a lot of work. Still, is it any wonder why Danna ran out on her wedding?


“[Aunt] Sudie'ʹs biggest triumph had been saying no to her fatherʹs marriage arrangement in favor of a career. Today, somewhere around the age of sixty, she was retired from a banking career with her own home, bank accounts, and the freedom to do as she pleased.” (78)


Being of Indian descent, Danna always had to forfeit control to a man (first, her father, and now, a husband.) She was NOT going to take it from Eric, the handsome groom she accidentally kidnapped.


Through a treachery battle with misfortune and a leisurely stroll through Small Town USA, Danna and Eric will learn to look beyond first impressions. Even though neither is willing to admit it, there is an attraction there. Who wouldn’t love the 6-foot hunk compared to the 5-foot troll? No one should have to crouch. Their fumbling attempts at avoiding the spark were adorable. In fact, the whole story was a battle of tug-and-war—they want this person, but they don’t want this person. And all this happens in a weekend.


A great multi-cultural romance! A quick and easy read.

Posted by Sandra's Book Reviews at 9:06 AM