Review: HOW TO NAVIGATE ZOMBIE CAVE AND DEFEAT PIRATE PETE by Mick Bogerman 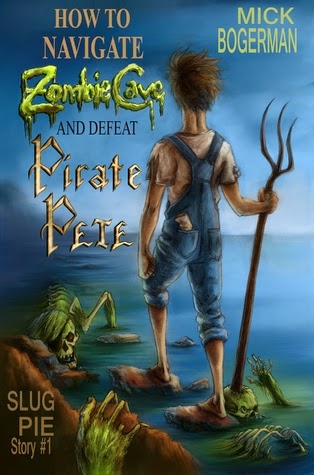 Armed with a pitchfork, miner’s hat, and map, Mick Bogerman dares to hunt for pirate treasure in Zombie Cave. His little brother Finley is tied up at the beach. Literally--Mick tied him up. No one needs a little brother tagging along when you’re going to slay the undead.
But Mick soon wishes he’d taken some human company with him, because lurking in every corner, reaching from every crevice, is another hungry corpse. No wonder the place is named Zombie Cave! And finding treasure in the twisty tunnels is a lot harder when your map disintegrates. And man-oh-man the cold, dark tide chases fast. But the worst part about fighting off ravenous flesh-eaters is the one monster deadlier than a regular zombie . . . the worst of the worst . . . Pirate Pete.

My thoughts: The story is told in the POV of Mick, a wildly imaginative, crafty, and courageous young hero.  Each chapter is a step to navigating the dark cave and detailing every rigorous, disgusting task to finding the treasure. It was gross, but not scary—just right for kids.


Reading this filled me with nostalgia, recalling those Goosebump books I read as a kid. The language was colorful and descriptive, but it was also clean and relatable to most 12-year olds. Story was simple, quick, and fun. I may not have been 100% into it the entire way, but it was a cute adventure story.