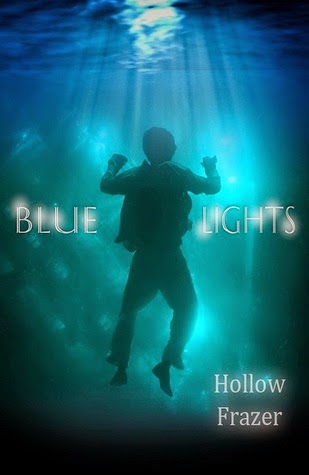 Trapped in blank cell with no escape, the white of the walls so bright that it hurts your eyes while the chains on your feet bite against your ankles.  For Morgan, there was nothing scarier or more confusing.


The bulk of this short story was set in this one dank and depressing room, where panic ran wild and hope had no space. Life seemed to be slowly draining out of Morgan’s body. Then an apparition appeared before his eyes. Was he delirious or was this real?


“This is real Morgan. I am neither a trick of the mind nor an illusion of some drug. In this world, between life and death, I am either your ticket to survival in a world that your blood-stained hands have destroyed or death to a hell where you will be destroyed.” (5) Oooh, chilling!


For the most part, the reader is kept in a hazy blackness of confusion. Random names kept popping out of Morgan’s subconscious as he battles to break free from his prison. Who were these people? And why was it called “blue lights” when there was none? It was mostly white.


Even with these lingering questions, this was a poetically well-written account of that agonizing moment of insanity before death. Personally, I think this short story would be better as part of a collection so we can learn more of this character, his life, his past, and, more importantly, what he did and why he did it.